Historical facts and information about the capital of Namibia - Windhoek. The emphasize is on less known facts from the town's history.

Windhoek was founded in the valley that was most likely the bowl of the prehistoric lake which was proven by the fact that a vegetation layer was found during the construction of the Sanlam Building, Independence Avenue. Typical bottom of the lake deposits were found at the depth of 15 metres.

Nama called Windhoek AiGams (''Hot water'' because of hot springs of Windhoek) and Herero used name Otjimuise (''Place of smoke'') but it was Nama's chief Jonker Afrikaner who gave the town its present name - '' windy corner''. There are two versions for the origin of the name: windy place (only 28% calm days a year) and name of farm Winterhoek in the Cape where Afrikaner's family originally was from. 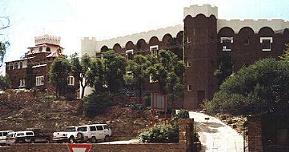 Windhoek climate makes it a very nice place to live in: mostly dry but with a quite reliable rainfall with an average of 360 mm a year. Another reason for establishing a settlement here were several fountains with good healthy water. German colonists found morass in the Windhoek's valley that they drained later. Windhoek's altitude is around 1650 m above sea level (railway station: 1642 m, International airport: 1680-1720 m, Ausspanplatz: 1650 m). The highest mountain around the capital is Grossherzog at 2330 m above sea level (south of Windhoek on the way to Rehoboth with TV tower on top).
The settlement was founded in 1840 by Jonker Afrikaner who built his first house next to present South African High Commission (previously Berg Hotel). For a long time Windhoek was a small settlement abandoned from time to time during Nama-Herero wars. 18 October 1890 Curt von Francois reached Windhoek with 32 men and commenced construction of Alte Feste establishing permanent German presence. Shortly after small fort was erected which forms part of Schwerinsburg castle now.

National Monument. The oldest building in Windhoek (1890). Built as a headquarters for Schutztruppe and later served for South African troops the building was later used as a hostel for Windhoek High School (from 1935). Became a museum in 1962.

Floods in Namibia were frequent after periods of drought and caused damage to roads and railway lines.

Elisabeth House. Storch Street. National Monument. Built as a maternity home in 1908 and named after the Duchess Elisabeth zu Mecklenburg who was the wife of the President of German Colonial company.

The southern wing and central building were built in 1912. In 1929 the northern wing was added, built in the same style. The station still serves its purpose.

Metal arch bridge built in 1922 over highway B2 to Gobabis.

These buildings are probably two of the earliest in Windhoek, apart from Alte Feste.
Built in mid 1890 for artillery division of Schutztruppe as an ammunition strore and weapon repair shop.

High Court building. Built in 1908. Remained in use till late 60's when the new High Court building was opened near Kudu Monument. Presently serves as a headquarters of Veterinary Division of the Ministry of Agriculture.

Located opposite of the Windhoek Municipality. Built in 1893, it was enlarged after 1900 and a gabled roof was added.

The oldest building is former Hotel Kronprinz (1901-1902). Gathemann building was erected in 1913 and expanded in 1926/7 and Erkrath building (1910) is the last to the right. Architect Wilhelm Sander.

At the beginning of the century there were four breweries in the country: Kronen Brewery in Swakopmund, Omaruru Brewery, Klein Windhoek Brewery and Felsenkeller Brewery in Tal valley in Windhoek. The demand for local beer was increasing rapidly and the brewery was expanded in 1912. After World War 1 a number of German citizens were deported back to Germany and smaller breweries had to close down. Omaruru and Klein Windhoek breweries were purchased by Herman Olthaver and Carl List. Hnasa Brewery joined the Consortium in 1968 when the South West Breweries were formed, renamed to Namibia Breweries after Independence. 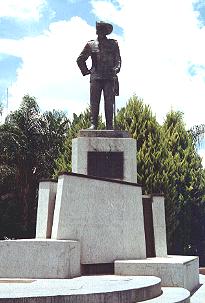