Sossusvlei (sometimes written Sossus Vlei) is a salt and clay pan surrounded by high red dunes, located in the southern part of the Namib Desert, in the Namib-Naukluft National Park of Namibia. The name "Sossusvlei" is often used in an extended meaning to refer to the surrounding area (including other neighbouring vleis such as Dead Vlei and other high dunes), which is one of the major visitor attractions of Namibia. 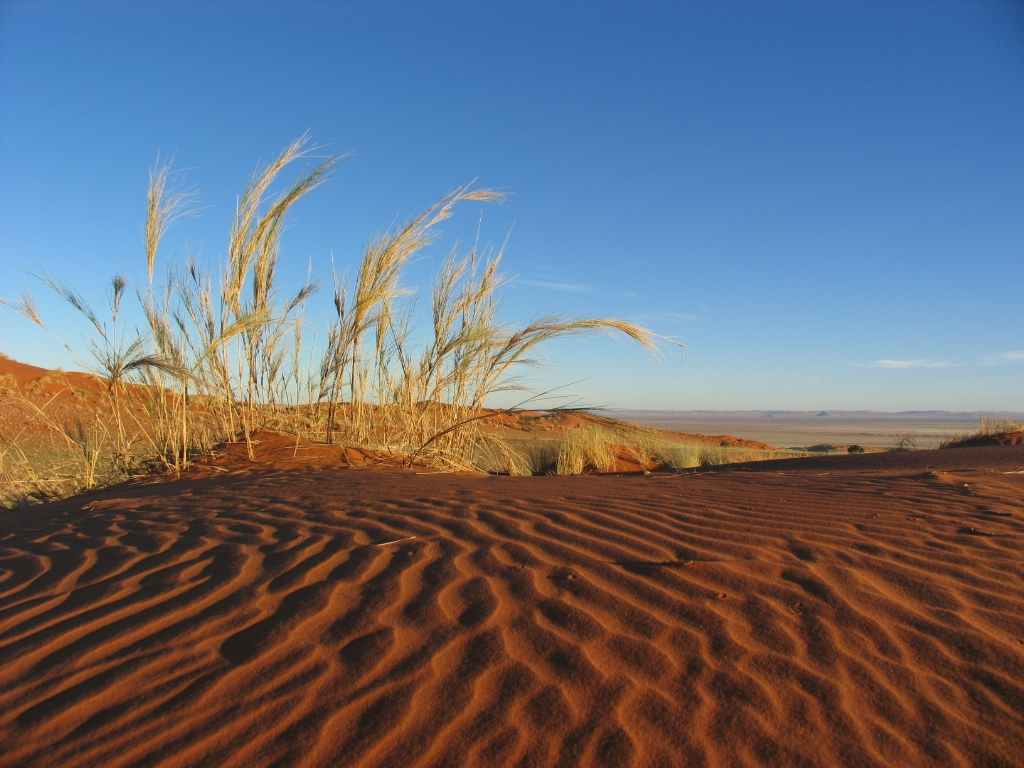 The name "Sossusvlei" is of mixed origin, and roughly means "dead end marsh". Vlei is the Afrikaans word for "marsh", while "sossus" is Nama for "no return" or "dead end". Sossusvlei owes this name to the fact that it is an endorheic drainage basin (i.e., a drainage basin without outflows) for the ephemeral Tsauchab River.

The Sossusvlei pan proper is the flat ellipse in a lighter shade of color seen behind the dune in foreground (mostly on its right).

The Sossusvlei area belongs to a wider region of southern Namib with homogeneous features (about 32.000 km²) extending between rivers Koichab and Kuiseb. This area is characterized by high sand dunes of vivid pink-to-orange color, a consequence of a high percentage of iron in the sand and consequent oxidation processes. The oldest dunes are those of a more intense reddish color. These dunes are among the highest in the world; many of them are above 200 metres, the highest being the one nicknamed Big Daddy, about 380 metres high.

The highest and more stable dunes are partially covered with a relatively rich vegetation, which is mainly watered by a number of underground and ephemeral rivers that seasonally flood the pans, creating marshes that are locally known as vlei; when dry, these pans look almost white in color, due to the high concentration of salt. Another relevant source of water for Sossusvlei is the humidity brought by the daily morning fogs that enter the desert from the Atlantic Ocean.

Fauna in the Sossusvlei area is relatively rich. It mostly comprises small animals that can survive with little water, including a number of arthropods, small reptiles and small mammalians such as rodents or jackals); bigger animals include antelopes (mainly Oryxes and springboks) and ostriches. During the flood season, several migrant bird species appear along the marshes and rivers. Much of the Sossusvlei and Namib fauna is endemic and highly adapted to the specific features of the Namib. Most notably, fog beetles such as the Namib Desert Beetle have developed a technique for collecting water from early morning fogs through the bumps in their back.

Access to the Sossusvlei area of the Namib-Naukluft National Park is from the Sesriem gate, which is located in the surroundings of the eponymous canyon. From Sesriem, a 60 km tarred road leads to Sossusvlei proper. 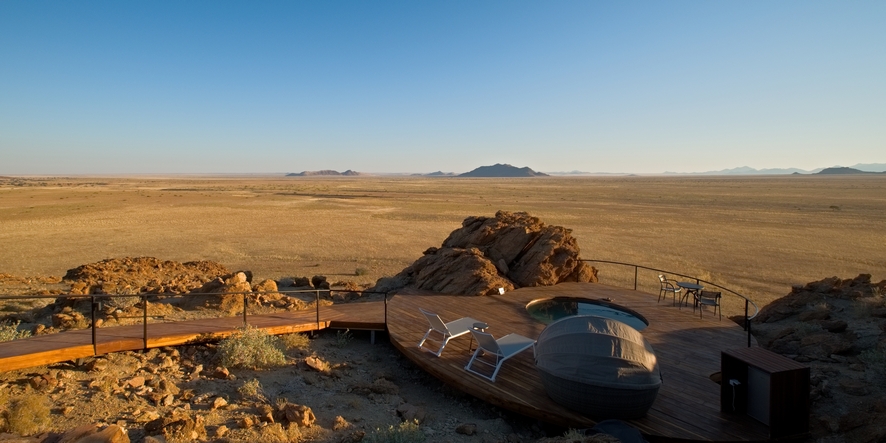 The Elim Dune is a high and relatively isolated dune located 5 km past the Sesriem gate, on a branch of the main road connecting Sesriem to Sossusvlei. The dune takes its name from a farm that used to be in the area before the National Park was established.

Dune 45 is so called because it lies 45 km past Sesriem on the road to Sossusvlei. It is also known as "the most photographed dune in the world"; because of its unusually simple and fascinating shape, and its proximity to the road, that make it convenient for visitors to stop by and take pictures. It is 80 meters high and it is not very steep, so that it can easily be climbed.

Sossusvlei is about 66 km past the Sesriem gate. The last 6 km can only be traversed with 4WD vehicles as the concrete road ends and sand begins (the place where the concrete road ends is known as "2x4 parking" as any non-4WD vehicle must stop there). Sossusvlei is a clay pan, of roughly elliptical shape, covered in a crust of salt-rich sand. While the pan has been shaped over time by the Tsauchab river, the actual flooding of the pan is a relatively rare event, and sometimes several years pass between one flood and the next one. The river is dry most of the year, and even when it is not, it carries relatively little water to the vlei. The vlei is surrounded by high orange-reddish dunes, partially covered by a vegetation comprising grass, bushes, and some tree (mostly of species Acacia erioloba).

Big Daddy is the highest dune in the Sossusvlei area; it is about 325 meters high (height may vary over time as it is made of sand). Dune 7 which is the highest dune in the world but not big daddy, as it's the seventh dune past the Tsauchab River before dune 45 on your right handside towards Sossusvlei (note that this should not be confused with another "Dune 7" found in Namibia, near Walvis Bay). Big Daddy is located past Sossusvlei proper, near Dead Vlei. It faces another very high dune known as "Big Mama".

Deadvlei is another clay pan, about 2 km from Sossusvlei. A notable feature of Deadvlei is that it used to be an oasis with several acacia trees; afterwards, the river that watered the oasis changed its course. The pan is thus punctuated by blackened, dead acacia trees, in vivid contrast to the shiny white of the salty floor of the pan and the intense orange of the dunes. This creates a particularly fascinating and surrealistic landscape, that appears in uncountable pictures and that has been used as a setting for films and videos.

Hiddenvlei (or Hidden Vlei) is the third most famous vlei in the Sossusvlei area. It is 4 km from the 2x4 parking, and it is the less visited.

Since Sossusvlei is possibly the foremost attraction of Namibia, much has been done by the Namibian authorities to support and facilitate tourism in the area. The concrete road has been built in early 2000s to connect Sesriem and Sossusvlei's 2x4 parking is one of the very few non-urban concrete roads in Namibia. Several accommodation structures are found along the border of the National Park, between Sesriem and the nearest settlement, Solitaire. Recently, structures have been built inside the park as well (that is, past Sesriem's gates). All tour operators and travel agencies in Namibia, including those of Windhoek, offer trips to Sossusvlei. Some also organize scenic flights over the dunes, either with small planes (mainly from Swakopmund and Walvis Bay) or in hot air balloons (departing from Sesriem in the morning).

As a consequence of its fascinating and surrealistic landscapes, Sossusvlei is one the most photographed places in Sub-Saharan Africa. The area has been the setting of a number of commercials, music videos, and movies, especially of fantastic genres; one of the most well-known examples is the psychological thriller The Cell (2000), where the Sossusvlei landscape is used to represent a virtual reality. Other movies with scenes shot in Sossusvlei include The Fall and Steel Dawn.

See a list of contacts to take along when visiting Namibia.

Can you please mention on the web page that there is a shower with a paraffin geyser at the Tjeriktik camp site (on the Naukluft mountain). Visitors must just bring say 500ml of paraffin for a nice hot shower. We missed out on this luxury as we didn't have any paraffin with us.
Thanks
Regards
Cronje Loftie-Eaton, Namibia