This information has been reproduced with a permission from copyright holder Mr. Rob Raeside.

The German administration of South West Africa lasted little more than three decades from 1884 to 1915. In contrast to territories which made up the British Empire, virtually all of which were granted a distinctive heraldic and vexillological identity, German colonies and protectorates did not have their own heraldic devices or flags. Following in the Portuguese and Dutch colonial practice, the Germans treated their overseas possessions an an integral part of one empire and consequently the Imperial German Arms and flags were used throughout the Empire, including German South West Africa as Namibia was then known.

During a visit by the then German Secretary of State, Dr. Solf, to German possessions in Africa during 1912 - 1913, he noted that each of the British colonial territories had their own distinctive colonial emblem. 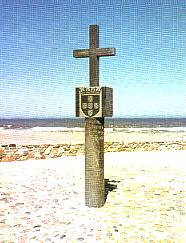 The fact that these "colonial flags" all followed a single pattern made a great impression on Dr. Solf who submitted a memorandum to Kaiser Wilhelm II stressing the desirability of adopting distinctive emblems for Germany's overseas possessions. He went to far as to suggest that the matter receive urgent attention. The Kaiser agreed and suggested that Dr. Solf take the necessary steps to prepare the appropriate designs. In close co-operation with Johann Albrecht, Duke of Mecklenburg and the Herald's Office a series of designs were prepared and submitted to the Kaiser.

The flags were to be based on the German horizontal tricolour of black, white and red charged in the centre with a distinctive shield of the colony. In the case of South West Africa, this was to be a blue shield bearing a silver ox's head and diamond.

The outbreak of World war I in 1914 diverted attention to more pressing matters and the flags designed for Germany's colonial possessions were never taken into use.

Under the mandate system, set out in Article 22 of the Versailles Treaty, ex-enemy territory would be governed by individual states, which later would be accountable to the League of Nations. South West Africa was mandated to South Africa and the South African Red Ensign came to be flown in the territory until 31 May 1928, when the South African national flag (horizontal orange, white and blue stripes with flaglets in the centre) was adopted.

On 21 March 1990 South West Africa gained its independence as the Republic of Namibia and adopted a new flag. The design was chosen by a committee which had been established to investigate and provide technical advice on new national symbols for Namibia. The public has been requested to submit designs and 835 designs were received. The official description of the flag is as follows:

Although no colour has a specific meaning, the symbolism attributed to the national flag by the Chairman of the National Symbols Sub-committee at a press conference on 2 February 1990 is as follows:

A flag for the President of Namibia was designed by the State Herald of South Africa, Mr. Fred Brownell, a member of the Sub-committee investigating new national symbols for Namibia. It is based on the design used by the South African State President at that time and incorporates the blue, green and gold colours which had been the most popular amongst the entries received by the sub-committee. The design for this flag was approved on 16 March 1990 and comprises a gold triangle, with its base the full length of the hoist and its apex the middle of the fly edge, with a blue triangle above and green triangle below. In the gold triangle is the full achievement of the Namibian coat of arms. The official description is as follows:

The flag of the President of Namibia shall be a rectangular tricolour in the proportion of three in the length to two in the width, from hoist per pile throughout, blue, gold and green; the gold charged in the hoist with the Arms and supporters of the Republic of Namibia proper, the height of the full achievement being one half of the width of the flag, with its centre line positioned one third of the flag, away from the hoist.

New Arms were adopted at independence and are described heraldically as follows:

Quiz : Which other coat (not necessarily national) and respective boa had a prominent _Welwitschia mirabilis_?
Antonio Martins - 1998-02-20

The former South West African territory arms had a Welwitschia under the shield but you have got me on where else it is used!
Bruce Berry - 1998-02-20

To the best of my knowledge, neither Mozambique nor Namibia have naval ensigns.
Bruce Berry - 1998-01-19