Rehoboth is a town of 21,000 inhabitants in central Namibia just north of the Tropic of Capricorn. Located on the B1 road, 90 kilometres south of the Namibian capital Windhoek, Rehoboth lies on a high elevation plateau with several natural hot-water springs. It receives sparse mean annual rainfall of 240 millimeters, although in the 2010/2011 a record 731 millimeters were measured. A population of Rehoboth was 21,380 in 2005.

There is a popular Lake Oanob Resort near the town in the middle of African savanna.

Administratively, Rehoboth is classified as a town with its own council of 7 elected individuals. Rehoboth is divided into eight neighbourhoods, called blocks. The oldest part of the town is blocks A, B and C, whereby block B contains most public services and shops. Block D is home to the wealthiest inhabitants of the town. Block E is the poorest neighbourhood and was originally (under Apartheid) designated for blacks. Blocks F,G and H are the newest neighbourhoods. The current mayor of the town is Mr. Pieters living in Block E.

Public amenities include a public hospital, primary and secondary schools and a district court with resident magistrate. The Oanob Dam, approximately six kilometres from Rehoboth, supplies the town with fresh water. The majority of the population consists of Basters. 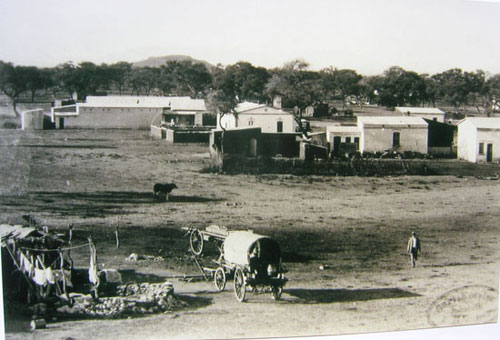 groups who called it |Anis meaning smoke; referring to the cloud of condensed water vapour hanging over the hot springs in the morning.

The missionary Franz Heinrich Kleinschmidt of the German Rhenish Missionary Society named the place Rehoboth in 1845, when a mission was established among the resident Nama (Khoikhoi). In 1864, the Nama abandoned the area as a result of an attack by the Orlam Afrikaners.

In 1870, the Basters, who had migrated out of the Cape Colony in 1868 moved into the territory and were granted permission to settle at Rehoboth by the participants of the peace conference of Okahandja on 23 September 1870. In a few years, the Basters were closely linked to the town of Rehoboth and became identified as Rehoboth Basters or Rehobothers. The population increased rapidly from an initial number of 333 in 1870, 800 in 1874 and 1500 by 1885. The growing Baster population settled in the surrounding areas, which would become known as the Rehoboth Gebiet (meaning ‘area’).

In 1885, Baster Kaptein Hermanus van Wyk signed a 'Treaty of Protection and Friendship' with the German Empire which permitted him to retain a degree of autonomy in exchange for recognising colonial rule. Relations between Rehoboth and Germany remained close for more than twenty years but in 1914, following the outbreak of World War I, Germany's use of Baster soldiers to guard South African prisoners - contrary to the terms of their enlistment - led to armed revolt. German forces then attacked Rehoboth, committed atrocities against Baster civilians and attacked refugees encamped upon the mountain of Sam Khubis, but, despite repeated attacks and the use of superior weaponry, were unable to destroy the Basters' position. Next day, the Germans retreated and Rehoboth's Baster community was reprieved.

Namibia was occupied by South Africa in 1915 and, ten years later, a second rebellion broke out at Rehoboth. This revolt collapsed, however, when colonial forces - armed with machine-guns and supported by two warplanes - marched into the town and arrested more than 600 people.

The town is served by Rehoboth railway station. There is also a private landing strip, for small aircraft near the Oanob Dam. To the west is Gamsberg Nature Reserve.

Situated 87 km south of Windhoek at the foot of the Auas Mountains, Rehoboth is home to the Baster (literally, 'Bastards'), a fiercely proud and independent people who are the descendants of a group of farmers of mixed European and Khoisan blood. Nearby Oanob Lake is stunning, with new lakeside thatched chalets, well tended camping sites and a range of water sports and entertainment for families.
Phone code: 062. Police: 10111.