Omaruru is a city and constituency in the Erongo Region in central Namibia. The town has 14,800 inhabitants and occupies 352 square kilometres of land. The town is situated near the Erongo Mountains, on the usually dry Omaruru River. It is located on the main paved road from Swakopmund to Otjiwarongo. The name in the local Otjiherero language means 'bitter milk', as the cattle used to browse on a local bush that turned their milk bitter.

The town is known for its annual festival where the Hereros commemorate their past local chiefs, its winery and for the dinosaur footprints at nearby Otjihenamaparero. 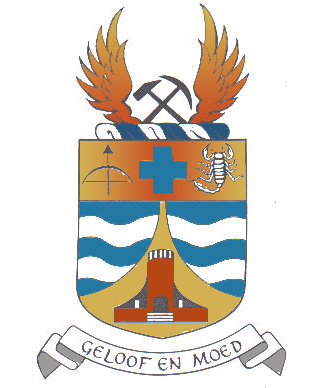 In 1871, Anders Ohlsson and Axel Eriksson established a brewery at Omaruru. Eriksson had also established a trading post, which flourished and by 1878 he employed about forty whites. Eriksson's business was based upon long-distance trading between southern Angola and Cape Colony, which necessitated the establishment of regional trade routes.

The town grew around a mission built in 1872 by Gottlieb Viehe, now a museum, and was attacked in 1904 during the Herero and Namaqua Genocide. Captain Franke's Tower was later erected to commemorate the relief by Hauptmann Franke's troops of the local garrison that was beleaguered by Hereo tribesmen who had risen against the German colonial presence.

The descendants of Lothar von Trotha and the von Trotha family travelled to Omaruru in October 2007 by invitation of the royal Herero chiefs and publicly apologised for his role in the Herero Genocide. Member of the family Wolf-Thilo von Trotha: "We, the von Trotha family, are deeply ashamed of the terrible events that took place 100 years ago. Human rights were grossly abused that time," BBC News.

In the 2010 regional elections, SWAPO's Uparura U. U Michael Tjirare won the constituency with 1,102 votes. The defeated challengers were Josef Landuleni Nangolo of the Rally for Democracy and Progress (570 votes), Lisken Noabes of the United Democratic Front (398 votes) and John Tjiuongua of the Congress of Democrats (96 votes).

The town lies on the Trans-Namib Railway.

Small town Omaruru is located 50 km from town Karibib and 240 km from Windhoek, the capital of the country. Set in the heart of game-farm area the town is surrounded by array of mountains with the most prominent, the Oruwe, located southeast of town. Kristall Kellerei, the only winery in the country, is located in Omaruru. The name Omaruru is derived from Herero omaere omaruru meaning "bitter curd" which is apparently how the cattle's milk tested after eating particular bush growing in the area around tow. The first European to reach the area was Hugo Hahn, the missionary who visited it in 1851. In 1868 Herero Chief Zeraua settled in Omaruru although "officially" the town was founded only in 1870 with an arrival of another missionary, Gottlieb Viehe. Famous explorer Charles Anderson, being attracted by plentiful game in the area, established a hunting camp on the banks of Omaruru River in 1858. In 1870, the hunter Axel Eriksson and brewer Anders Ohissen formed a partnership to exploit the game and by 1880 they had succeeded in wiping out all the elephant, rhino, lion and giraffe once living in the area. in 1880s Omaruru was repeatedly attacked in Herero-Nama wars before peace was secured in 1889. The German garrison was stationed here in 1894, the town began to grow since then. The first postal office was opened in 1895. The garrison moved to a new fort, today's magistrate's court. By the end of 1896 Omaruru had the largest population of European settlers in Namibia. The town was besieged in 1904 during the Herero uprising. The military commander at the time, Captain Franke, was away in the south helping to put down the Bondelswart uprising. He marched 900 km in 20 days and broke the siege by leading a cavalry charge and defeating Hereros. Franke's Tower was built in 1907 to commemorate the event. Omaruru received full municipal status in 1909.

Festivals: Every year on the last weekend before 10 October the Herero hold a march to and from the cemetery where a former leader Wilhelm Zeraua is buried.